At the Word of Mouth Marketing Association’s Summit in 2010, Steve Knox, then CEO of P&G’s in-house word of mouth marketing agency, Tremor, gave a compelling talk entitled “Why People Talk.”  Knox found that consumers talk when we give them an element of surprise that does not fit inside their existing expectations about the brand.

UM’s Wave, an annual global tracker of social media trends, specifically probes why people share content via social media.  Essentially, sharing content on social media has rapidly become a short-hand form of communication.  Whatever we share with others directly reflects on us, the sharer.  What we share – from online articles to video clips – is the basis of our social currency.  If you agree with the insight “it is easier to appreciate art than it is to create it,” then it naturally follows that it is easier to share content than it is to create it.

Wave shows that when Americans share content, we are happy when someone comments, or re-shares it with others we know.  Conversely, we are peeved when people ignore it completely or, worse, they unfollow or block us.

As Oscar Wilde put it: “There is only one thing worse than being talked about, and that is not being talked about.”  Clearly, what was true about human nature in 1890 is just as true in 2015, regardless of our advances in communications technology.

In this world of sharing, bloggers have boomed in importance. Wave indicates that consumer trust in bloggers (including video bloggers) has risen from 26 percent two years ago to 37 percent today.  As a result, YouTube influencers have mushroomed in importance.  Only six  years ago, Gary Vaynerchuck led the charge as a YouTube influencer with his energetic Wine Library TV which wittily reviewed wines in a very down to earth way, inspiring his thought leadership book, Crush It.

Today, YouTube influencers such as Michelle Phan and Captain Sparklez are so successful that their scale has made them ‘YouTube millionaires.’  My own personal favorite, who is less well known in the States, is Zoella.  Zoella emanates a disarmingly honest demeanor in her how-to videos, with an  onscreen candor which reflects the vitality Vaynerchuck championed back in the late 2000s.

Wave has allowed us to examine the drivers of sharing related to branded content, where we identified 16 key motivators examining why people shared and how this could spur key communications goals such as awareness, consideration, loyalty, etc.  An insight map was developed highlighting the relationship between the motivators of sharing branded content and building awareness: 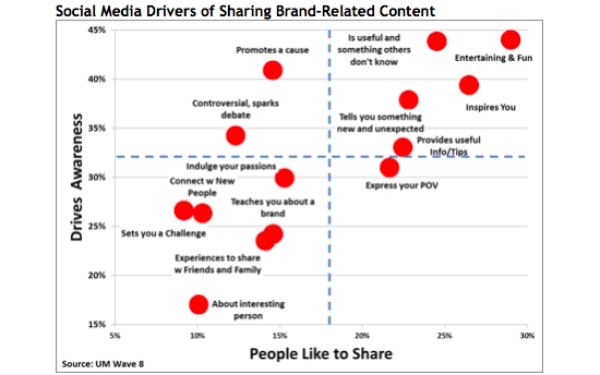 The best drivers of sharing are in the top right-hand quadrant which is highest for prompting both sharing and awareness.  As we might expect, entertaining & fun is a lead prime driver, but also very close is what inspires you and being useful and something others don’t know or tells you something new and unexpected.  The elements of something others don’t know and something new and unexpected align with what Steve Knox explored in his talk to word of mouth marketers.

Not that we should take entertaining & fun as a default communications tactic. As Karen Nelson Feld of the Ehrenberg Bass Institute noted in her book on viral videos: “Funny isn’t enough… happiness is OK… but exhilarating is what we want.”

All the findings in this area clearly indicate the higher we can inspire a consumer’s emotions, the greater the chance of boosting their brand-related shares. Increasingly, brands are stepping into this area since it is where the greatest consumer response can be tapped. For example, several women’s brands have advocated what it really means for women to be empowered, not only Unilever’s Dove and P&G’s Always but also Under Armor – attracting mass media attention along the way.

This particular branch of empowering viral videos reflects the “inspiring” element seen in the Wave map.

In truth, while we can identify the ingredients of why people share, the success of any one individual video also depends on luck and timing.  What is emerging is that underlying truth behind social media sharing goes beyond Knox’s element of surprise or Oscar Wilde’s insight about not being talked about.  It also reflects the biblical view on the power of sharing and reciprocation that “It is better to give to than to receive.”